Dr. David Baker is an Associate Professor at the University of Hong Kong’s (HKU) School of Biological Sciences and the Swire Institute of Marine Science. He earned his Ph.D. from Cornell University in Ecology & Evolutionary Biology and joined HKU in 2013 after a postdoc with the Smithsonian and Carnegie Institution. Dr. Baker’s research program is highly interdisciplinary, drawing upon tools in biogeochemistry and molecular ecology to address big questions in coral reef ecology and evolution as well as developing tools to fight illegal wildlife trade. He is also the Director of MarineGEO-Hong Kong and HKU’s Stable Isotope Mass Spectrometry Laboratory. As a Research Fellow and Professor at the Biodiversity Research Center of Academia Sinica, Taiwan, Dr. Allen Chen’s research interests span across coral evolution, responses of corals and coral reef ecosystem to climate change, long-term social-ecological research, and coral reef governance. He earned his Ph.D. from James Cook University, Australia, in 1995. He is also the Taiwan node coordinator of the Global Coral Reef Monitoring Network (GCRMN), East Asia. During the 5th APCRS, he will share his research and experience on coral evolution and genetics. Rili Djohani has worked for over 25 years to improve the management and financial sustainability of marine protected areas and reduce the use of unsustainable fishing practices in Southeast Asia. She is the Co-Founder and Executive Director of the Coral Triangle Center (CTC), a learning center of excellence on coastal and marine resources management. Its programs focus on strengthening local leadership and capacity through an integrated portfolio of Marine Protected Area (MPA) learning sites, customized training programs and learning networks, and facilitation of public-private partnerships in the Coral Triangle region. Ms. Djohani held several senior positions in The Nature Conservancy (TNC) such as the Coral Triangle Program Director. She established the World Wildlife Fund (WWF) marine conservation program in Indonesia (1989–1993) and she was part of the core team to help establish the multi-national Coral Triangle Initiative for Coral Reefs, Fisheries and Food Security (CTI-CFF). She was recently awarded the World Reef Award by the International Coral Reef Society (2022) in recognition of her conservation achievements in the Coral Triangle region on reef management.

Dr. Mark Erdmann is the Vice President of Asia Pacific Marine Programs for Conservation International (CI), with a primary focus on providing strategic guidance and technical and fundraising support to CI's marine conservation programs in the Asia Pacific. Dr. Erdmann is a coral reef ecologist and taxonomist who lived for 23 years in Indonesia, though is now based in New Zealand since July 2014. During this time, he has logged over 12,000 scuba dives while surveying marine biodiversity throughout the region, and has now described 182 new species of fish, mantis shrimp and corals. He has published 235 scientific articles and 5 books. 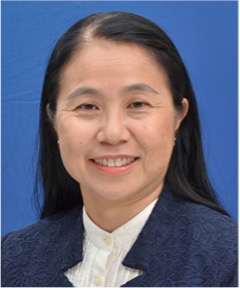 Dr. Beverly Goh is an ecotoxicologist and studies the effects of environmental change on marine organisms. Her career experiences include research on coral reefs and coastal ecosystems in Singapore, and interdisciplinary collaborations with various international bodies. She believes that science can be made real through experiential and activity-based learning and that nature holds secrets that is best uncovered by quietly waiting and observing. As a Senior Lecturer at Singapore’s National Institute of Education, Nanyang Technological University, her recent research efforts focus on facilitating Citizen Science through using marine organisms to monitor marine environmental health. The biomarker techniques developed forms her core research that aims to identify signals from nature to serve as important early warning signs of environmental stress. Dr. Youna Lyons is a marine policy analyst, trained in international law and oceanography in Australia, France, and the United States of America. Working at the interface of law and marine sciences, she specialises in general and technical issues of global and regional marine environmental governance, with a particular focus on Southeast Asia where she has been based since 2008. Dr. Lyons is a Visiting Associate Research Professor with the Centre for International Law at National University of Singapore as well as a trustee and the Chair of the Advisory Committee on Protection of the Sea (ACOPS – www.acops.org.uk), an observer in intergovernmental bodies involved in the protection of the marine environment. Dr. Nalinee Thongtham is a former researcher and head of the Marine Ecology Unit of the Phuket Marine Biological Center, Department of Marine and Coastal Resources, Thailand. As an innovator of active restoration of coral reefs along Thailand’s Andaman Coast, she has more than 25 years of experience in marine ecology research and coral restoration. Although now retired, she continues to give lectures in universities and is actively engaged in educating and raising awareness on coral reef conservation among tour guides and dive operators in Thailand. At the 5th APCRS, she will share her experiences in coral restoration, restoration projects done in Thailand, and the outcomes of these restoration efforts. She will also discuss how she created public participation to sustainably restore coral reefs on a large scale.